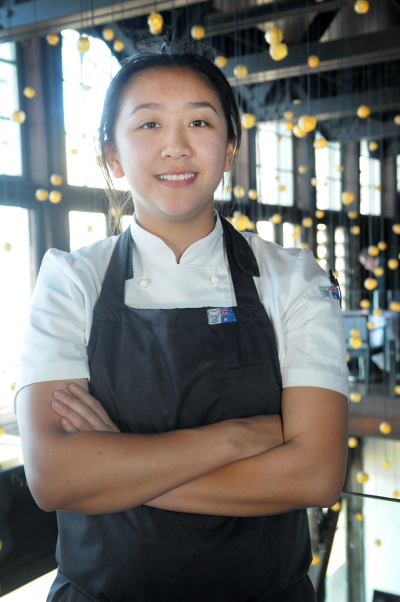 Executive Chef of award winning fine dining restaurant, The Flying Fish, describes his newest apprentice as the next Kylie Kwong.

Stephen Seckold, who this year offered Ashley Chan, a graduate from Marist Sisters’ College Woolwich an apprenticeship, says Ashley has the talent of the celebrity chef who was once a contestant on Masterchef and is now a TV star and owner of the Sydney-based restaurant Billy Kwong’s.

“In an industry that is starved for employees, Ashley is doing great,” he said. “She is competent, confident and has a good attitude. If all apprentices were like her ¬– well behaved and well mannered – life would be a breeze.”

Mr Seckold, who has worked in the industry for 17 years, currently has four apprentices on staff, but says that they only offer jobs to a select few.

It didn’t take long for Ashley to secure a job.

The 18-year-old completed at school five work placements (70 hours) at A La Carte restaurants like the Deckhouse, Doyles, before landing full-time work at the Flying Fish in January this year.

Next year, she will be training other apprentices and will be able to become a qualified chef in two years thanks to studying the extensive VET subject of Commercial Cookery at the Southern Cross Catholic Vocational College (SCCVC) Burwood one-day a week, while continuing Hospitality and her other HSC subjects at Marist Sisters’ College.

“I wanted more practical experience. SCCVC allowed me to finish my Cert II and gave me the opportunity to experience big catering functions,” she said. “It was great to stay in school, get an ATAR and learn with my friends.”

For Ashley, who grew up making dinner for her parents for six years during high school, cooking has always been fun and in the family.

“It’s really cool to be able to create something that has come out of the ground, say a potato!” she said. “But since working, I’ve learnt that there’s not much that can prepare you for on-the-job training. Being a chef is hard yakka! It’s about good time and self management.”

Ashley, who loves working with seafood because she grew up fishing, now has the pleasure of cooking for her family and friends at the Flying Fish, after securing a full-time apprenticeship.